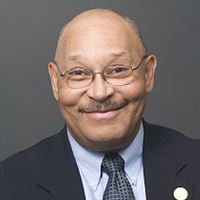 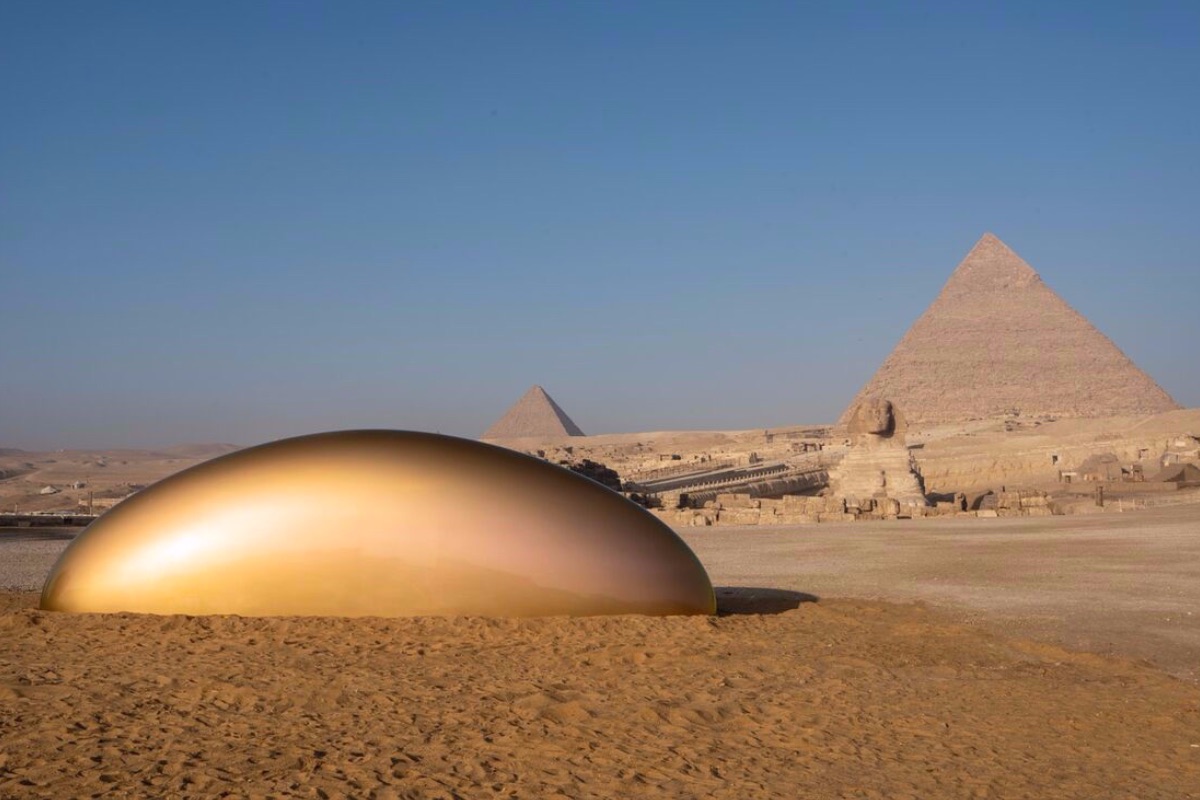 As I stood in the waiting area of the notorious Jackson’s at Reston Town Center, I didn’t need to wait long to watch the larger-than-life presence walk through the revolving door entrance. His first comment to me was, “Of course, you’re wearing leather pants,” followed by a gripping bear hug. I could tell that he smiled at me even through his mask.

After the hostess sat us, we chatted and caught up. Bill Bouie sits on the Public Art Reston Board of Directors as the current Vice Chair, among many of the hats he wears around Fairfax County. Before we began, I knew a few things about Bill within my short time-period at PAR. He is tall. He is direct. And he does not say too much.

Enthused that I would not be the one doing the talking on this occasion, I enjoyed the fish, while we explored different time periods throughout his life and really his take on all things “Bill.”

In true Bouie-style, he began by stating matter-of-factly, “I am the most blessed man that’s ever been born. I’ve never had a bad day in my life. I pinch myself every day I wake up.” He recalled his mother telling him at five years old that attitude is everything.

We dove into the basics. Originally from Detroit, Bouie has lived in Reston for 36 years. He told me that at birth his father prophesied, “There’s the first Black pope.” Of course, this path could have possibly come to fruition as Bouie entered Catholic seminary at 13 and spent seven years studying for the priesthood. Fortunately for Reston, he did not continue that path.

Bouie majored in political science and minored in philosophy at Western Michigan University. Although he won a scholarship to study urban planning at NYU, he ended up staying closer to home at the behest of nuns at his home parish school where he was hired to teach 6th grade religion and physical education. He went on to receive a master’s degree in Business Management from Central Michigan University.

When asked what type of leader he is, Bouie gives an emphatic and confident response, “Inclusive, collaborative, passionate.” I added a few more qualities such as direct and intentional.

He confided, “My Park Authority Board calls it the ‘Bouie Bomb.’ I listen intently. Once the conversation is done, I wait for someone to invite my input. And then I do. I wait for that purposefully because I don’t want to be overwhelming or lead the conversation in a way that the discussion is closed.”

As we continued along this path of passion and intention, Bouie explained, “I really, really know me. There’s no mystery of me to me. [And] attitude is everything. I put myself in positions to succeed. I surround myself with people who are team players and have confidence in themselves. It’s important for me that people make their own decisions. It is a character trait that I admire and support.”

He further explained that when he is passionate about something, that is what he interacts with. It all goes back to the beginning of never having had a bad day in his life. He has always been intentional about his time. His priorities are, “Family first. Organizations that I interface, interact with. Friends, racquetball, softball, my baseball, my community.”

During a pause to take some delicious food in, but between the bites, we touched on maintaining such priorities in the age of social media consciousness. On this point, Bill explained more of his core values. He mused, “A lot of people take a shotgun approach to life… I’m more of a pea shooter kind of guy. I feel it. I see it. I want it…and I put together a plan to get it. Happiness is not my mission. In my younger days, happiness was not a goal. Happiness was accomplishing these things that I had prioritized and set out in my life.”

When asked why he is so involved in Fairfax County, he simply stated, “People have confidence in me. I am, and I have been a community confidant.” He views this as his gift. We spoke on how trust goes a long way, being one of the most critical elements of any venture. This is how Public Art Reston began, he explained, through entrusting in the ideas of PAR’s founder Joe Ritchey.

Bill recalled meeting with Joe and saying to him, “You have an idea, we have a need, and I may have access to funding. Let’s do this.” And so it began, serendipitously, on the back of a paper napkin outside of Clyde’s restaurant in Reston Town Center. Bouie added, “Everything was ad-hoc back then. To take this thing…and build it was exciting with the initial assemblage of people. He concluded, “That day is over. Our time is almost up. How do we build the bridge to that next group of leaders with those next bunch of great ideas that need to be implemented, funded, and maintained going forward?”

Good question, Bill. I think that question will be answered over time, and I look forward to continuing working alongside you during that transition.

“An unprecedented contemporary art exhibit at the Great Pyramids of Giza” read the eye-catching headline crowding my inbox. Staying current with the contemporary art scene is a daunting task in the digital age. Indeed, keeping up with the daily flood of email subscriptions, ones that you hope will keep you informed in your own field at the very least, can be a challenge. Thus, thank you for reading our newsletter. We appreciate you! I’ll be brief.

I clicked on this intriguing news item to learn that not only was “Forever Is Now” the first ever art exhibit staged in the shadow of the pyramids (how cool is that?!), but also that out of ten international artists invited to create a unique artwork for display, three of them have a direct connection with Reston. Weird, strange, whatever you want to call it, worlds can collide in the most interesting ways.

I immediately recognized the work of American artist Gisela Colon. A photo (pictured here) captured a space age, golden bubble emanating from the sandscape. Eternity Now, a work Colon created in dialogue with the Great Sphinx, reminded me of the luminous, seemingly shape shifting sculptures that were on view in Reston this past spring in a show organized by Tephra ICA. While a trip to Egypt was out of reach, I was excited to know I could still see one of Colon’s sculptures in the DMV. Her Parabolic Monolith Iridium will be on view in downtown DC until February 2022.

Only last week, and before the final weekend of “Forever Is Now”, Public Art Reston partnered with Tephra ICA to host a spoken word poetry reading to engage audiences with Colon’s sculpture. The spoken word poet Tatiana Figueroa Ramirez fulfilled a creative response to the sculpture in tangential and provocative ways. She addressed the energy that humans and the natural world (and beyond) share in conversation with one another. Figueroa, like the artist Gisela Colon, was raised on the island of Puerto Rico. Albeit Colon was present only virtually, the significance of the event showed the power of art being absorbed in a multitude of ways, at the intersections of art and culture.

But that’s not all! I scrolled further down to see a pair of joined giant hands reaching up out of the sand. From that angle they appeared to frame Khafre’s pyramid perfectly. The work Together by Italian artist Lorenzo Quinn (son of the famed actor Anthony Quinn) is indicative of a representational style often employed to dramatic effect; his gigantic “hands” comprising Support for the 2017 Venice Biennale appeared to hold up a palazzo façade. If you haven’t seen his work in Reston, head over to the plaza at Wiehle-Metro East station. There you will find Quinn’s Force of Nature. Installed in 2018 as part of a voluntary public art proffer fulfilled by the developer Comstock, this work is equally theatrical despite its more diminutive scale. The cast bronze figure captures our attention as she restrains a globe from spinning out of control. Metaphors abound!

But wait, there’s more! The connection between “Forever is Now” and Reston goes back to September 2015 and the work of internationally renowned French photographer, JR. I did a double take while smiling at his whimsical Greetings from Giza, an optical illusion of an arm emerging from the desert to hold a photo that rips the pyramid at the top. In 2015, Public Art Reston and Reston Community Center partnered to participate in JR’s INSIDE OUT project. Restonians were invited to contribute photographic self-portraits to We Make Reston, our community’s contribution among the 400,000+ participants in this global initiative to date, and one that includes more than 138 countries & territories. INSIDE OUT is an ongoing collective public art project, which was conceived by JR to empower individuals to highlight our shared humanity. Like his Giza work, large-than-life photos of Restonians greeted viewers in unlikely settings including a temporary construction wall and the entrance to the South Lakes High School.

Weird or not, such connections are what makes following the art news worthwhile, despite the never-ending demands of keeping up with a constant news feed. Watch this space for more unexpected discoveries.

*That’s Weird is PAR’s Public Art Manager Phoebe Avery’s on-going series appearing in the enewsletter Emerge. Here she will tackle her thoughts and perspectives of all things public art, with a special nod to Reston.

XThe owner of this website is committed to accessibility and digital inclusion. Steps are being taken to correct issues and to conform with WCAG 2.1 AA Web Accessibility standards. Automatic and manual testing is ongoing.