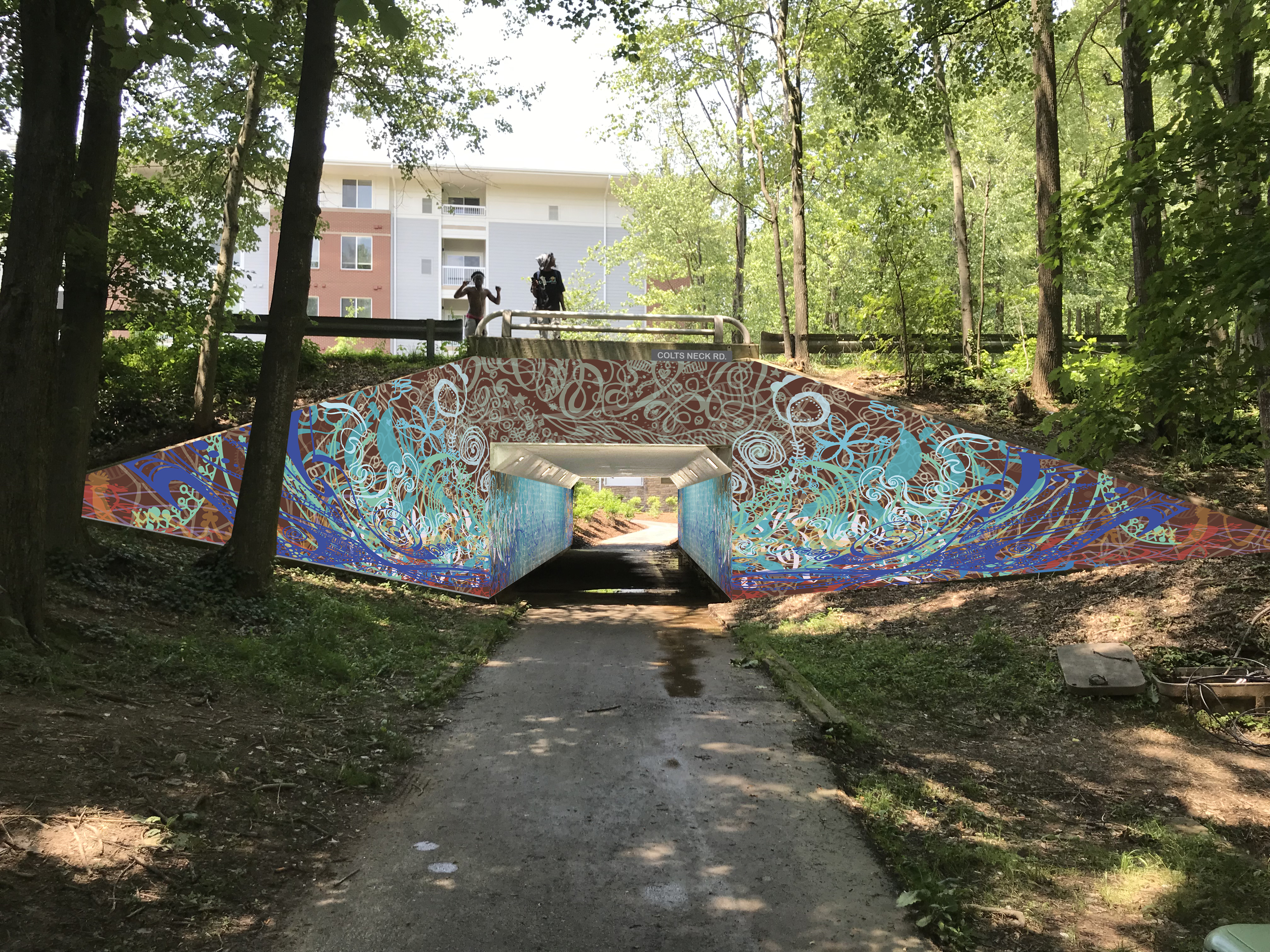 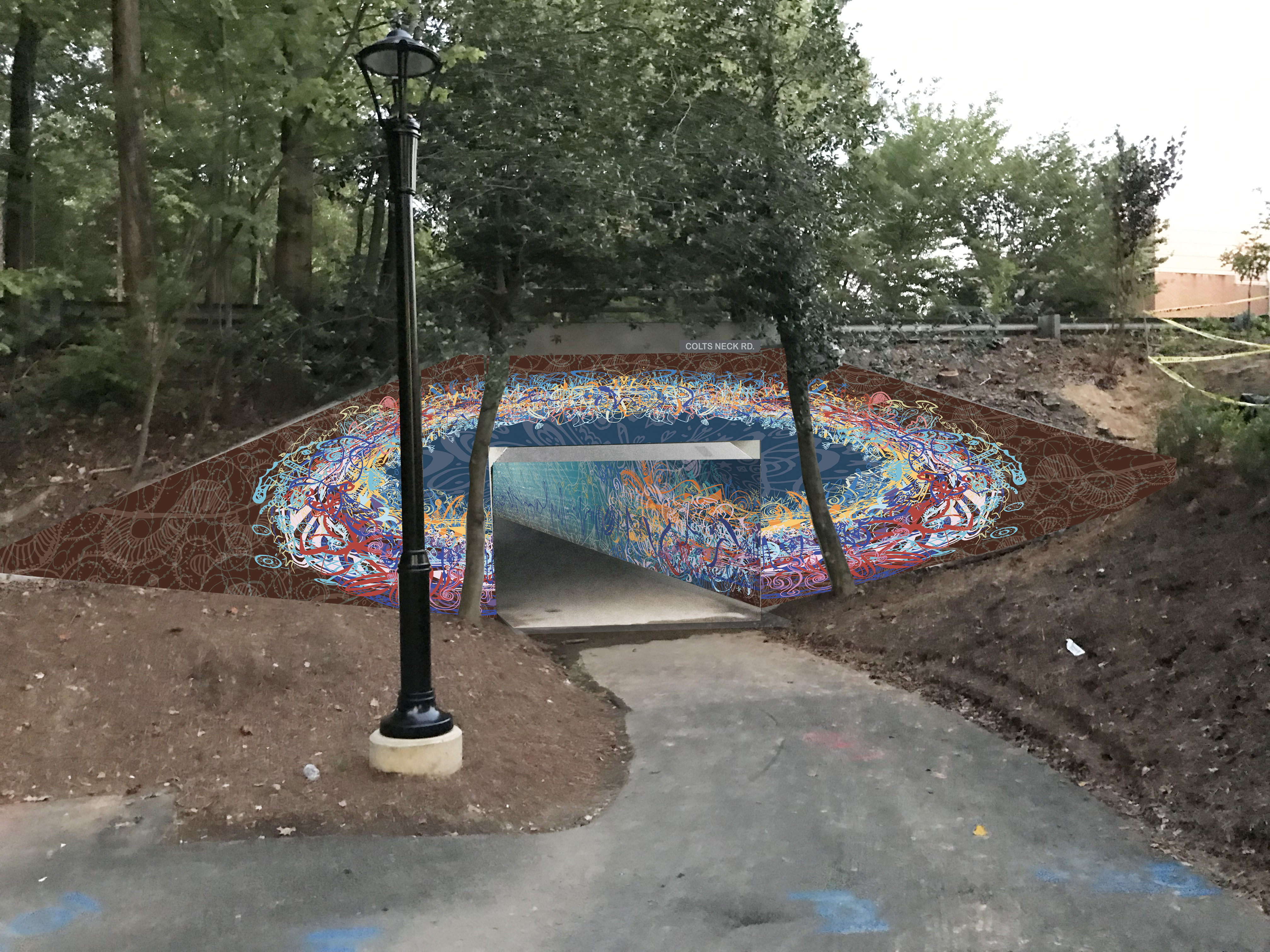 Ben Volta was inspired by the 55 miles of pathways and combined 710 drawings created by an intergenerational team of over 650 Restonians to create a colorful connector that reverberates collective energy and rhythm. In workshops led by the artist, students from Hunters Woods and Dogwood Elementary Schools and Southgate Community Center, seniors from Hunters Woods Fellowship House and Hunters Woods at Trails Edge, as well as Reston residents, adapted a quote by Henry David Thoreau to inspire creative action:“Draw a path (however wide, narrow, straight, jagged, crooked, curly and winding) in which we can all look at and enjoy with love and reverence.”

Philadelphia artist and educator Ben Volta has been selected to create a permanent public artwork for the Reston community at the Colts Neck Road Underpass. A 2015 recipient of a Pew Fellowship in the Arts, Volta is known for his public artwork, including intricate public murals and sculptures, working within the fields of education, restorative justice, and urban planning. He has a participatory approach to making art and has worked with numerous organizations and schools. According to Volta, his practice “stands on the belief that art can be a catalyst for change, within individuals as well as the institutional structures that surround them.” Volta—who as a young artist was a member of the groundbreaking art collective “Tim Rollins and K.O.S.” (Kids of Survival), in the south Bronx section of New York City—earned his certificate in sculpture from the Pennsylvania Academy of the Fine Arts in 2002 and his BFA from the University of Pennsylvania in 2005.

The Public Art Master Plan for Reston, adopted in December 2008, identifies the underpasses that carry Reston’s path system under major roadways as locations for new artwork commissions.  By partnering artists with Reston’s elementary schools and community organizations these projects seek to create permanent enhancements in public spaces throughout Reston.

Some of Reston’s most wonderful artworks were created by Gonzalo Fonseca in the underpass under North Shore Drive as part of the original development of Lake Anne Village Center. In 2009, Public Art Reston commissioned its first permanent public artwork at the Glade Drive underpass. Mosaic artist Valerie Theberge created a mural and gave mosaic workshops to Hunters Woods Elementary School students who created mosaic pieces that were incorporated into her work at the Glade Drive underpass. Reston’s remaining 24 underpasses, however, have not benefited from such careful design or the integration of artworks. Public Art Reston will support the creation of new permanent artworks in and around the remaining underpasses. The organization will especially support projects that couple artworks by professional artists with artworks by local students.

The Public Art Goals identified for the underpass projects are as follows:

The artist or artist team will be asked to address the spirit of the Hunters Woods Neighborhood; respond to the cultural diversity of the community; and develop an artwork that identifies the underpass as a civic facility within the fabric of the surrounding neighborhood.  Through workshops with students, the artist will introduce creative skills, thereby providing them with tools to articulate their ideas and observations and the confidence to transform their physical environment.